The following guest post titled “The Forgotten Child by Anne Ford – Sibling Issues” is printed with permission from the author. The team at Special Needs Book Review (SNBR) received the four books written by Anne Ford and John-Richard Thompson listed at the end of this post. We thank the authors for these books and for a guest post introducing their book published in March 2015 titled,”The Forgotten Child:“If She is Special, What am I?” Sibling Issues: When Learning Disabilities Cause Tension in the Home”.  Read about this book on our SNBR site. The following guest post explains why the authors chose The Forgotten Child:“If She is Special, What am I?” as the title for their fourth book.

In one of my early speaking engagements for my first book Laughing Allegra, a woman sat in the audience in tears – some recent traumatic event, I assumed; but after my talk, she told us the angst was caused by her seeming inability to treat both her children equally.  She felt like a neglectful parent, that she was not able to give her child without special needs the attention he deserved, and she asked what she could do about it.

“Can it really be that bad?” I thought.  I have since learned that, yes, the ongoing effort (and failure) to divide attention equally between children, especially when one has special needs, can, indeed, really be that bad.  Since I was often asked this same question, I decided to make it the topic of my newest book The Forgotten Child.

Some parents face sibling issues on a daily basis.  The non-disabled child may complain about the attention paid to the child with learning disabilities (LD), or may cry and ask repeatedly why you spend so much time with the sibling with special needs.  Sometimes the child with special needs causes such havoc in the home, or has such overwhelming demands, that the other siblings feel left out or put upon.  In other families, the parents may have absolutely no clue this is an issue at all.  They watch their children grow and feel they’ve done the best possible for all of them, and now comes the shock of discovering the non-disabled child has been having trouble all along.  This is what happened to me.  I did not realize my son Alessandro felt I had favored his sister Allegra until he was in his early twenties, nor did I understand that this imbalance of attention had become a source of some resentment.  He never vocalized it.  He never fully understood what was happening.  I never explained his sister’s disabilities to him in a clear way, so as far as he was concerned, she was receiving preferential treatment.

One of the young adults I spoke to in The Forgotten Child said all she ever heard was that her sister was “special” – for instance, when she asked her mother why she had to clean her room while her sister was allowed to leave hers a mess, her mother said, “Because your sister is special.”  All through childhood she wondered, “If she is special, what am I?”

What can we do about it?

Explain, explain, explain – that is what I tell parents now.  Sit down with your child.  Talk about what is going on with their sibling.  Of equal importance is to listen to your children when they say they feel neglected or “less than” – and really hear them too.

My son Alessandro puts it this way:  “I wish my mother had asked a professional to explain exactly what was going on with my sister.  It was hard for me to understand why my sister could learn to become an expert figure skater but met with constant frustration with her reading, writing and math skills.  While I got punished for bad grades, I saw Allegra getting comforted.  While I was pushed to do better, Allegra was allowed to move on and sidestep the problems arising from her education.  To all parents, I cannot stress enough how important it is to allow your other children to share in what you are learning about LD. If I knew then what I know now, everything would have been a lot clearer.”

I agree with everything Alessandro said: if only he could have told me earlier on, or I had sensed he felt this way on my own, I doubt my son ever would have felt the way he did.

If more parents could follow his advice it would go a long way toward helping siblings of those with LD feel less like the forgotten child in the family. 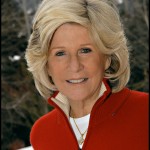 Anne Ford served as Chairman of the Board of the National Center for Learning Disabilities (NCLD) from 1989 to 2001.  Mrs. Ford has received many honors for her work, including the Lizette H. Sarnoff Award for Volunteer Service from the Albert Einstein College of Medicine and an Honorary Degree, Doctor of Humane Letters from Leslie University for her advocacy work for people with learning disabilities, and has spoken on this issue at numerous corporations such as JP Morgan Chase, Goldman Sachs, and Ford Motor Company.

She has co-authored four books with John-Richard Thompson: Laughing Allegra, On Their Own, and A Special Mother. These first three books were designated as finalists for the “Books for A Better Life” Awards.  Her fourth book is called The Forgotten Child: “If She is Special, What am I?”  When Learning Disabilities Cause Tension in the Home.

She has a son Alessandro, who is married with two children, Eleanor and Olivia.  Her daughter Allegra was married on May 5, 2012.

READ Also
Review of The Forgotten Child: “If She is Special, What am I?” Sibling Issues: When Learning Disabilities Cause Tension in the Home  by Anne Ford and John-Richard Thompson

Attachment disorder is a heartache for all involved. Anyway, I figured that my 5 yr old, who is VERY competitive with her siblings, wanted KidCompanions Chewelry Just Because Someone Else Had It. Turns out I was… wrong. END_OF_DOCUMENT_TOKEN_TO_BE_REPLACED