Loving, Observant Parents Can Help Kids Cope with Their Needs by Ken Myers When you think about kids chewing on things you typically think the teething ages, but what about when it goes beyond that stage? There are many reasons for kids to want to chew on things: stress relief, comfort, something to do, and so on. I know that my children, although they were perfectly on track in many other ways, had issues with this as well.

Here are some things my kids did and how they have learned to cope with their need to chew:

When my first child was born I had not been around a lot of babies so I did not really know what to expect. I knew that many babies sucked their thumbs or sucked on their hands so when my daughter was born and she began sucking on the edges of furniture I did not get really upset. I did however become concerned when we went to the grocery store and she immediately began sucking on the handle of the grocery cart! We remedied that problem by covering it but I started to watch her and a pattern of sucking on just about anything and everything began to evolve.

I went out and bought a whole bunch of different kinds of teething toys trying to eliminate this problem. They seemed to help some because she could indeed suck on them but it did not seem to matter to her what it was. She was not a big fan of the pacifier either but she did love her bottle. If I placed a pacifier in her mouth she was not comforted but even if the bottle was empty she was happily sucking away.

Her love affair with the bottle became interesting as well. I had tried the various types, sizes, and shapes of nipples seeing if one was preferred over the rest by my daughter. I found one that she loved; it was the NUK, so I went out and stocked up on them. But later I came to find out that it was not just the brand or type, it was that one particular nipple. I had to clean and sanitize it between each feeding or she would not take the bottle, she would toss it across the room!

The Whole Family Got Sick

This all worked out okay even though it caused a little more work for me and sometimes a panic situation would ensue if I had forgotten to get it ready in time but all in all we did fine. Until, that is, the entire household came down with some really awful virus/bug that made it impossible to keep our food down. We toppled liked dominos one right after the other when this virus hit our home, including my little eight month old girl.

And just as a little side note in the story my little baby girl was amazing through it all. We ended up lying in the bed side by side because I could not get up and down to help her. My mom and grandmother had come to help and they were both out for the count as well. It was pretty awful. Well, every time my little girl needed to vomit she would sit up and look at me with those big brown eyes and wait. I would grab the trash can and she would vomit and fall back down on the bed. It sounds so sad to talk about and it was but I was totally amazed that an eight month old baby was that controlled. And it is something that has carried through in her life ever since.

Well, to get back to the original story, we all began to feel better and wanted to eat something more than just broth and a little water or juice. The doctor said it was fine to let her try her bottle again so I got it ready. She felt much better than I did at this point, just so you understand. When I handed it to her she began to drink but that one nipple had finally been washed and boiled one too many times because it burst open and the milk came flowing out all over. I ran to get another nipple, the same kind exactly, and put it on and gave it back. She put it in her mouth and immediately took it out and threw the bottle. I put the old one back on to show her it was gone and this was our only other choice. After two or three times of throwing the bottle I offered her a Sippy cup and she was off the bottle as of that moment.

Her brother had similar sucking issues when he came along. Not sucking on furniture and inanimate objects like his sister but he adored his bottle and hated the pacifier. He did not break himself off the bottle at eight months. After he began to walk he took the bottle with him everywhere, not holding it, sucking it. And it did not matter if it had milk in it or not. He would walk around with that bottle just bobbing up and down in his mouth. We eventually had to hide the bottles when he was nearing age two and tell him that they were “all gone”. We proceeded to look for them in all their usual places to no avail. I really did not think this was going to work but sure enough after he looked and could not find them I offered him the Sippy cup and he took it. I just wish the rest of the problems that came up in my son’s life would have been that easy!

My daughter had some reoccurring issues with her sucking needs. When she got into school she would suck on her lip until it was almost raw. It seemed to be a stress issue and happened when she was really concentrating on something hard. She did it a lot at school during times when she was working on paperwork. She did it when she had special projects to do at home. And it happened when she read, which was most of the time because she was an avid reader. We kept reminding her not to suck her lip and it would help. She had to be made conscious of the fact that she was doing it.

Later on in her early teen years she developed another stress related issue that really shocked me and made me feel horrible as a parent. One day I walked into her room while she was drying her hair and I saw a bald area in her hair along the part, it was about an inch wide! I asked her about it and she acknowledged that she had seen it too. She said she realized she had been subconsciously pulling one hair out after another while reading! Well, I immediately called the doctor and after going in we found out that it was something called Trichotillomania which is a stress disorder that causes you to have irresistible urges to pull out your hair. It can be the head, the eye brow, or the eye lashes. He talked to her about her stress and it all seemed to center around school. She was an excellent student and had been making all A’s her whole life and now school was getting harder and she wanted to make sure she kept her high scores.

Our doctor was so good, he told her that he was pushing himself in school but during high school he found that he wanted to play tennis, which did not really fit into his academic plan. He gave in to the tennis but when the SAT test came along he aced it. He told her he got into medical school and she could do anything she wanted but to slow down and enjoy it some, just ace the SATs!

He also told her to wear a hat when she read at home so that it would deter her unconscious hair pulling. Just making her aware of the issue did a great deal to help, however I understand that this can be a very serious issue for some people and is not solved quite so easily. Every case is different. 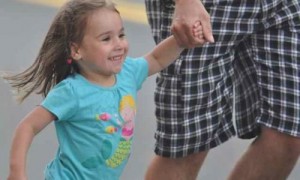 The most important way to help our children overcome habits that could be harmful to them is to be observant and notice these habits forming early. If they are babies try and change these habits by offering them different choices or moving them from the circumstances that seem to bring it on. For older children the first step is to make them aware of what they are doing and pointing it out to them. Keep reminding them when you see the habit reoccurring and tell them what your concerns are and that you love them. If it is something they can not seem to overcome then by all means get them into see their doctor and get his opinion. Many children have idiosyncrasies but as they mature a loving, observant parent can help them to cope better with their needs.

Ken Myers is a father, husband, and entrepreneur. He has combined his passion for helping families find in-home care with his experience to build a business. Learn more about him by visiting @KenneyMyers on Twitter.

Attachment disorder is a heartache for all involved. Anyway, I figured that my 5 yr old, who is VERY competitive with her siblings, wanted KidCompanions Chewelry Just Because Someone Else Had It. Turns out I was… wrong. END_OF_DOCUMENT_TOKEN_TO_BE_REPLACED