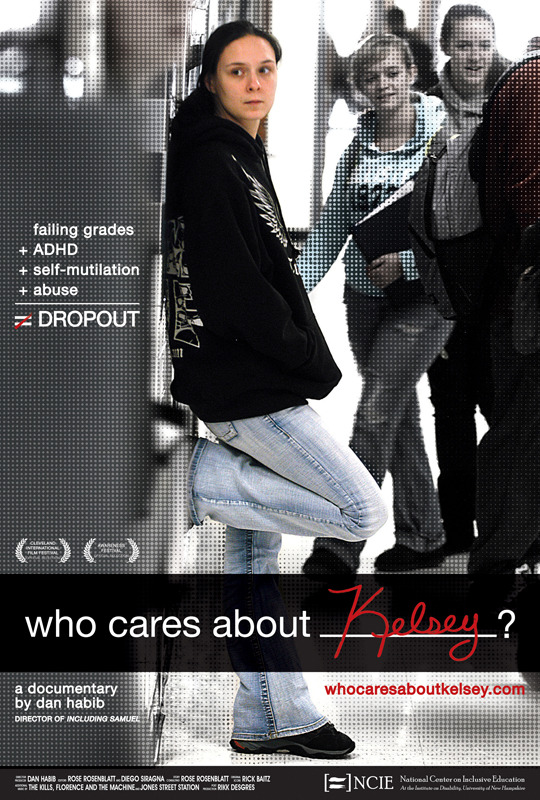 Nicole Eredics, host of The Inclusive Class Podcast, is pleased to announce that filmmaker, Dan Habib, will be returning to their show this Friday, August 30 @ 9 AM EST to discuss the themes and purpose of his recent film, Who Cares About Kelsey?  The film follows Kelsey Carroll, a high school student, who transformed from a “problem student” to one who became motivated and self-confident with the help of caring, supportive adults.

Kelsey Carroll has one goal –  to graduate from high school –  and plenty of reasons why she shouldn’t. She attends a school with one of the highest dropout rates in New Hampshire and has dealt with homelessness, sexual abuse, and ADHD. As a freshman, she didn’t earn a single academic credit, but she did get suspended for dealing drugs. ‘Who Cares About Kelsey?’ is the story of Kelsey’s transformation from a defiant and disruptive “problem student” to a motivated and self-confident young woman. Along the way, critical figures in her personal and educational life shape her coming of age and play important roles in an education revolution that’s about empowering – not overpowering – youth with emotional and behavioral challenges. — A synopsis of the movie, Who Cares About Kelsey? by Dan Habib.

Here are the podcast details:

“Who Cares About Kelsey” – An Interview with Dan Habib

Where: The Inclusive Class Podcast @ www.theinclusiveclass.com

Listen to the live interview with filmmaker, Dan Habib. Dan will discuss the theme of inclusion in his new film Who Cares About Kelsey? The film follows Kelsey Carroll, a high school student, who transformed from a “problem student” to one who became motivated and self-confident.

Dan is also the creator of Including Samuel which was broadcast nationwide on public television stations in Fall 2009 and was nominated for an Emmy in 2010. It is now available as a DVD in 17 languages.

Habib’s films have been screened at universities, national conferences and independent theatres and have been used a catalyst for inclusive education across the country and internationally. Who Cares About Kelsey? was recently featured in Education Week and has been screened at 10 film festivals, winning “Best Feature Film” at the Lights Camera Help Film Festival.

Dan Habib is the Filmmaker in Residence at the Institute on Disability at the University of New Hampshire. Before joining UNH in April of 2008, Habib was the photography editor of the Concord (NH) Monitor. In 2006 and 2008, he was named the national Photography Editor of the Year and he has been a judge of the Pulitzer Prizes and the Best of Photojournalism. He is a six-time New Hampshire photographer of the year and his freelance work has appeared in Time, Newsweek and the New York Times. In 2012, Habib received the  Champion of Human and Civil Rights Award from the National Education Association

If you miss the live podcast, it will be recorded and archived at www.theinclusiveclass.com and on iTunes.

Attachment disorder is a heartache for all involved. Anyway, I figured that my 5 yr old, who is VERY competitive with her siblings, wanted KidCompanions Chewelry Just Because Someone Else Had It. Turns out I was… wrong. END_OF_DOCUMENT_TOKEN_TO_BE_REPLACED